"The condition that the Serbian diplomacy is in isn't great, but it's not beyond repair either. It will take a lot of strength, effort, and time to bring it back to its glory days," Minister of Foreign Affairs Nikola Selaković said in his interview with Kurir. He also talked about the challenges that Serbia is facing in the international scene, the new government, the collaboration with the Prime Minister and the Cabinet ministers, as well as his family and striking a balance between the private and professional life.

After serving as General Secretary to the President, you have taken up the post of Minister of Foreign Affairs. How different is this job? Do you miss working with the President daily?

"I'm in frequent contact with President Vučić, both privately and professionally. As foreign policy is largely also within the remit of the President of the Republic, this area isn't new for me either as the former General Secretary to the President. I exchange information with the President regularly and discuss foreign policy issues. Under the Constitution, as well as in terms of his character, the President both inspires and sets the tone for our country's policies across different domains, including the area that I am currently in. His help is both invaluable and irreplaceable."

The post of a minister isn't new to you, as you were the Minister of Justice between 2012 and 2016. How much have the intervening years and the political experience you have gained changed your perspective in your work? What are the advantages of the present moment compared to then?

"Like most other lines of work, politics is a lifelong learning skill that requires constant development. Many domestic and international political circumstances have changed in recent years, and I've changed as well. Let others be the judge whether I've changed for the better. I do believe, however, that I am certainly richer in a professional sense, as I've had an opportunity to work with and learn from the top person for many years."

The Ministry of Foreign Affairs had a bad reputation for a while, with the media describing it as a "hotbed" of celebutantes. What was the situation that you found there?

"The condition that the Serbian diplomacy is in isn't great, but it's not beyond repair either. It will take a lot of strength, effort, and time to bring it back to its glory days. I found a raft of decades-long systemic and personnel-related issues. Having said that, the "celebutante" thing isn't true and is part of a broader attempt to trivialize our political scene and discredit the state institutions."

And what is the truth?

"It was, of course, a campaign mounted by a part of the opposition and the media supporting it, aimed at undermining the people's trust in the state. Not only are there no celebutantes, as you have termed them, at the Ministry of Foreign Affairs, but I find the number of smart, educated, and talented people – Ministry employees as well as the newest graduates of the Diplomatic Academy – encouraging. They are the future of the Serbian diplomacy."

This government has an expiry date, and snap parliamentary and presidential elections are expected to take place alongside local elections in Belgrade in the spring of 2022. How realistic is it for the Cabinet ministers to have any achievements in the space of a year and a half?

"A year and a half can be seen as both a short and long time frame. For people averse to taking action or those without a plan, even four years isn't enough. As the old saying goes, if one does not know to which port one is sailing, no wind is favourable. In the past two months, I have been taking an in-depth look at the Serbian diplomacy system, and working on setting manageable short-term priorities, as well as implementing the mid- and long-term goals. So, figuratively speaking, we know to which port we are sailing, and we'll make sure that the wind is favourable too."

How do you comment on the projections – made even by your fellow party members – that the Progressive Party won't win in the next election?

"No individual makes that decision; the Serbian people do. One of the major developments in the Serbian politics is measuring success by results – a criterion introduced by President Vučić. I hope that this change is irreversible, and that opportunities to perform important state duties won't be easily granted to those offering demagogy and empty talk to our citizens, but rather to those who have, or are able to have, concrete results."

On his Government colleagues

What has the collaboration with Prime Minister Ana Brnabić been like? How are you getting along with your colleagues? Are you friends with any of them privately?

"The results achieved by Ana Brnabić's government are measurable, and that is the most important criterion in evaluating someone's work. The Government of Serbia is a harmonious organism in which everyone should do their bit. Through the right combination of expertise and authority, Prime Minister Brnabić has ensured that individual parts of the state administration work in harmony with each other, rather than in isolation. I have a great – and I daresay, friendly – relationship with the Prime Minister. Moreover, there are Cabinet ministers who I've known for a long time, both privately and professionally."

'I've been teaching my children from an early age to love Serbia with all their hearts.'

In addition to your two sons, this year you have also welcomed your daughter into the world. What humane values do you teach your children?

"Although my children are still too young for those kinds of life lessons, I teach them, and will continue to teach them, how to acquire work habits, as in this way they will appreciate both their own and other people's work; to be honest and good Christians; to love their homeland; and to set noble goals for themselves in order to be useful to themselves, their loved ones, and their society. Since their early age, I have been teaching them to love Serbia with all their hearts and to be proud of their ancestors and our national values and traditions. I make an extra effort to ensure they spend as much time outdoors as possible – on Mount Zlatibor, where I am originally from, or in the Timok region, where my wife is from."

Serbia has attained a good standing in foreign policy in the previous years. Where can ambitions go from there?

"Accessing to the EU, regional cooperation, resolving the issue of Kosovo, developing traditional friendly relations and building new partnerships across the world remain our foreign policy priorities. Greater care for Serbs outside Serbia should be added to this. It's the sort of continuous effort where results do not happen overnight. Unlike in the past, we are aware of our international standing and our actual strength, as well as the importance that Serbia has in the geopolitical context. We will continue to build our reputation and relevance in small but important steps. We won't overestimate our own strength and significance, but we won't underestimate ourselves either, as Serbia and the Serbian people aren't new to international politics, and our role in international processes has never been insignificant."

The Washington Agreement stipulates that there will be no lobbying for the revocation of independence of the self-proclaimed state of Kosovo. Does that make your job more difficult?

"We honour our international commitments. Credibility is an important resource in diplomatic communication and, as a serious country, Serbia aims to be a trusted partner. Our efforts to protect the Serbian state and national interests in Kosovo has never been solely about lobbying for withdrawing the recognition of the unilaterally proclaimed independence of our southern province. This gives us enough room for action."

The US has a different president following the signing of the agreement. How will the collaboration with the new President, Joseph Biden, proceed?

"Serbia and the US were allies in the two world wars, and partners in resolving many global challenges in history. As you know, the key point of disagreement between us now is the issue of Kosovo. In this sense, nothing essential will change in the US policy. We will continue to defend our position with arguments, and to try to find in the US administration the people who are ready to listen and understand our position. I hope that the 140th anniversary of establishing diplomatic relations, which we will be marking next year, will be an opportunity to ease the relations with the US further and find a way to collaborate better and more productively in the future. The fact that Ambassador Marko Đurić is representing Serbia in Washington makes me happy and hopeful, as I am convinced that his personal efforts as well will contribute significantly to achieving that goal."

Excellent relations have been established with the US, the EU, China, and Russia, and the collaboration with the UK is being strengthened. How long will Serbia be able to maintain a good standing with everyone? And how difficult is this balancing act?

"The world is in a turbulent period of redefining the geopolitical relations and a changing balance of power. Many major global and regional players expect smaller countries to take sides, but in this fluid situation Serbia has estimated that military neutrality and building relations with both the East and the West are in its best interest. We have traditionally friendly relations with the Russian Federation. As for China, we have managed to improve our old friendship in a short space of time, and to build a relationship based on honest cooperation and mutual trust, which President Aleksandar Vučić has made an enormous personal contribution to. We are continuing to mend the relations with everyone that we have had disagreements with in recent decades. Serbia is proving to be a serious, responsible, and successful country, which is a significant capital in international relations."

Speaking of the region, there has been turbulence there – Ambassador of Serbia to Montenegro, Vladimir Božović, has been declared persona non grata. What steps will we take? Will Serbia send a new ambassador?

"Ambassador Vladimir Božović is the ambassador of Serbia to Montenegro. He has left Montenegro, but at the moment we are not considering recalling him. We have demonstrated our commitment to building harmonious and friendly relations with Montenegro by rescinding the decision to reciprocally declare the Montenegrin ambassador persona non grata. Montenegro is a country in which 28.57 percent of the population is made up of members of our nation, and it is in our interest to preserve their identity and ensure the exercise of the rights guaranteed in any country that embraces democratic values." 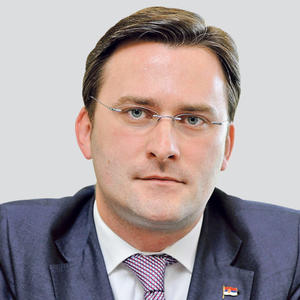 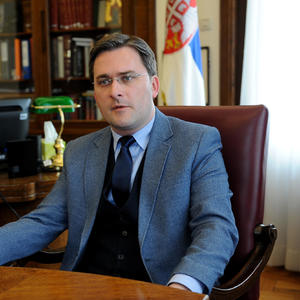