SEM FABRIZI: ‘Serbia receives the most financial aid from the EU in the region, reforms should be a priority’

‘The coronavirus knows of no borders or seasons. It is something as yet unprecedented. We should stay cooperative, cautious, and continue to heed the advice and instructions of medical doctors, as well as develop the vaccine,’ Ambassador of the European Union to the Republic of Serbia says.

In diplomacy, just like in life, it is good advice to be optimistic. When it comes to developing the coronavirus vaccine, pessimism won’t help a bit. Of course, this optimism should be grounded in reality and, what is most important, make us buckle down and work faster,’ says Sem Fabrizi, Head of Delegation of the European Union (EU) to the Republic of Serbia, in an exclusive interview for Kurir. He adds that Serbia can still count on the EU’s financial aid, underlining a ‘strong encouragement’ for the new government to put the EU accession reforms at the centre of its programme.

The EU has received harsh criticisms from many quarters at the start of the pandemic, to the effect that it did not rise to the occasion and have a good response to the crisis. What is your take on this?

I think this is an old and inaccurate story. We keep getting thanks and requests for additional support. Allow me to state a few simple facts. The state of emergency was declared in Serbia on 16 March. As early as 20 March, I signed an agreement on the first donation in the amount of 7.9 million euros to cover the expenses of 15 cargo flights bringing urgent medical equipment that Serbia had purchased around the world. These airplanes landed on the Belgrade Airport, and perhaps you saw me greeting some of them alongside the representatives of the Serbian authorities. They brought in 721 tonnes of medical materials. The last plane landed in early May. In April, I put my signature on another donation, in the amount of nearly 5 million euros, for the procurement of additional necessary materials, including masks, ventilators, tests, and 100 triage containers manufactured in Serbia. All the materials are in hospitals. Ahead of the new surge in the number of infected cases, on 15 July, I signed the third donation for hiring 200 more Serbian medical staff – doctors, nurses, and administrative personnel – for a period of six months, in order to strengthen the frontline hospitals. We provided personal protective equipment for the border guard force, hygiene packs and aid for the Roma community, the elderly, and single mothers in need of assistance. I can go on listing, and that is just for the health sector. Because, we also donated 78 million euros for the economy, and we get additional requests for assistance. Our solidarity is always in action.

How would you assess the current situation in the European Union?

The situation in the EU has largely stabilized owing to solidarity, cooperation, and strong measures. The Special Meeting of the European Council between 17 and 21 July resulted in an unprecedented step aimed at bolstering economic activities and paving the way to recovery. But, we should quickly put the economy back on its feet for all of Europe, including Serbia, which benefits from the investments and trade with the EU. From the standpoint of health as well, caution should remain high. This virus knows of no borders or seasons. It is something as yet unprecedented. We should stay cooperative, cautious, and continue to heed the advice and instructions of medical doctors, as well as develop the vaccine.

Are you optimistic regarding the coronavirus vaccine?

In diplomacy, just like in life, it is good advice to be optimistic. When it comes to developing the coronavirus vaccine, pessimism won’t help a bit. Of course, this optimism should be grounded in reality and, what is most important, make us buckle down and work faster. The EU advocates global, universal testing, treatment, and vaccination, as well as the mobilization of resources via international cooperation and joining forces with individual countries and global health organizations. Through the global call to raise funds in response to the coronavirus, 9.8 billion euros had been raised by the end of May 2020. Serbia’s contribution of two million euros is also important. This approach means universality, equality, and access to vaccines, especially for the most affected countries.

So, this means that the most affected countries would receive aid in obtaining the vaccine?

Together with its international partners, the EU is looking at how to join resources in order to jointly reserve the future vaccines with companies, for itself and for low-income and middle-income countries at the same time. The high-income countries could serve as an inclusive group of international buyers, and so speed up the development of a safe and efficient vaccine and ensure maximum access to it for all those who need it around the world. Specifically, the latest news on the clinical results of numerous vaccines entering the most important phase of clinical testing is very encouraging - in Europe as well. Given that vaccines need to be approved by regulators and manufactured by companies, which need to set their prices and distribute them around the world, all this poses extraordinary challenges both in terms of financing and infrastructure. This is precisely why we need to come together, join our resources, and continue to work in the true spirit of solidarity. Bearing the mind that the virus was identified early this year, and that there is a possibility that an important breakthrough occurs before the year ends, this gives us a veritable injection of optimism.

The EU's Seven-Year Budget has been adopted, and 750 billion euros have been earmarked for the recovery of the economy, which is hit hard by the pandemic. How much aid can EU candidate countries count on, and specifically, Serbia?

The new EU budget sets aside a total of over 12.5 billion euros from the pre-accession funds, intended specifically for countries like Serbia, which are in the process of accession. It is an enormous amount of new funds, given that they are donations, and constitutes an increase compared to the previous EU budget. Serbia will continue to benefit from other programmes as well, such as those in the areas of education and science, plus other funding not intended for specific countries. The whole package is yet to be fully approved before we have all the elements before us. I would like to mention two additional things in relation to these funds: 1. as a result of its size and capacity, Serbia is traditionally the one to receive the greatest amount of funds among the beneficiaries in the region; 2. these funds are aimed at helping Serbia implement the reforms which multiply its capacity to enhance prosperity, security, and democracy.

What sort of message is the EU sending to Serbia by the decision not to open a single negotiation chapter since the start of the year? For example, Serbian Minister of Foreign Affairs Ivica Dačić views that as putting pressure on Serbia, claiming that we are the only country in which opening chapters is not measured in terms of implemented reforms, but other things as well, e.g. the Kosovo dialogue with Priština.

The European Commission presented its findings regarding the rule of law in Serbia to the EU member states in June. This is part of the assessment of the progress Serbia has made in terms of the rule of law and basic rights in the context of pre-accession negotiations, which the Commission makes twice per year. The report, which was published on the website of the Ministry of European Integrations, points out that Serbia should accelerate reforms in the key areas of judicial independence, the fight against corruption, media freedom, the domestic handling of war crimes and the fight against organised crime. At the same time, the report assesses the progress made in, for example, the reduction of the backlog of unresolved old enforcement cases, border management, and asylum procedures, as well as in drafting a new media strategy in a transparent and inclusive manner.

But that obviously wasn’t enough?

There was no unanimity among the 27 members states regarding the opening of new chapters, and opening new negotiation chapters requires it. The general opinion was that the progress made was not enough to open new chapters. Don’t forget that in 2019, only two chapters were opened, which at the time meant a slowing down of reforms compared to the previous year. Once the summer is over, the Commission will present a complete assessment of the state of play regarding the reforms - not just in relation to the rule of law, but to all negotiation chapters. A complete analysis will be possible, but a strong encouragement is offered by the EU for the new government to put the EU accession reforms at the centre of its programme.

On the Brussels talks between Belgrade and Priština:

The dialogue should rise above the daily flak

After nearly two years, the dialogue of Belgrade and Priština on the topic of Kosovo has resumed. Is it realistic to expect a compromise solution in the near future if Priština heads for Brussels with a maximalist request – the recognition of Kosovo’s independence?

’The continuation of the dialogue under the auspices of the EU is good news. The dedication of both sides is also a good sign. Meetings are held in Brussels on very important matters, such as the internally displaced or missing persons, as well as economic cooperation, which is key to improving the economic growth in the region. It is hard to set a timeframe for its conclusion. There is political momentum which ought to be preserved and protected. There is a need to keep the dialogue above the daily political flak, with the end goal firmly in mind, which is full normalization of the relations between Belgrade and Priština. The entire EU is behind this effort.’ 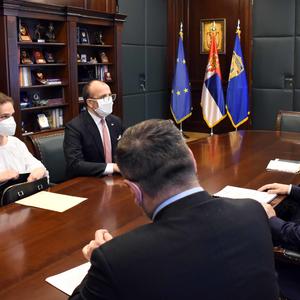 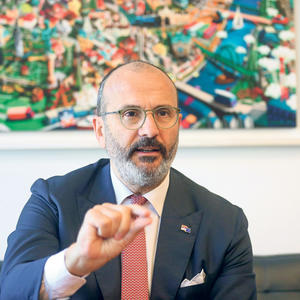 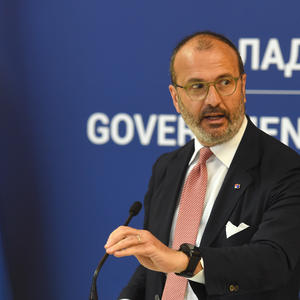