THE JAGODINA PROSTITUTION AND PAEDOPHILIA CASE

In the political skirmishes between the former and the latter, the potential victims – even if they mustered up the courage – would hardly dare report the monsters. Do not drag victims of violence through your political mud and stop exploiting them on the streets and at rallies.

The fact that for days now they have been using any means available and disregarding the potential victims of violence in their efforts to exploit a serious topic that has caused public outrage in order to score political points makes the confirmed political profiteers Marinika Tepić, Vice-President of the Freedom and Justice Party, and her boss Dragan Đilas no different from those accused by this duo of sexual exploitation of women – the "Mr. Burns's" of the SPS-United Serbia Coalition. Dragan Marković Palma, accused of pimping girls in Jagodina, has been whole-heartedly helped in the potential lawsuit and the trampling of victims by an old-new buddy of his – Mića Jovanović, the owner of Megatrend!

Both groups of people, for personal and political reasons of their own, have turned a serious topic that ought to be addressed by the institutions of the state into a media circus. The former, i.e. the Đilas party profiteers, have turned allegations of procuring girls in Jagodina into a veritable political farce. How else can one understand the political rally, the slogans, and the shouting in front of the police headquarters in Jagodina, where Tepić gave a deposition yesterday, than as an obvious farce? But, it is a farce with dangerous consequences, as it puts pressure on the institutions and makes it more difficult for them to do their job of protecting victims and bringing maniacs to trial! The latter, epitomized by Dragan Marković Palma and Mića Jovanović aka Megatrend, contribute not a jot more to uncovering the truth, and also disregard the potential victims. On the contrary! They have been cashing in on them and trying to drag them down into their own political mud!

Both obviously care least about the victims. Because the Marković-Jovanović duo – who, incidentally, have gone overnight from bitter enemies to playing on the same team (with Megatrend even offering Palma to be a witness for the defence) – continues to insult women in their descriptions of the infamous Jagodina parties! One gets the impression that they don't mind seeing the women at various celebrations as décor. Jovanović himself – admittedly, prior to his "enlightenment" – described scenes in which Palma's wishes were the women's commands. What's shocking is that they see nothing troublesome about such maltreatment and humiliation of women because – Goodness gracious! – they weren't minors and none had been raped?!

In the political skirmishes between the former and the latter, the potential victims – even if they mustered up the courage – would hardly dare report the monsters!

The state has shown in this as well as other similar cases, e.g. those involving Milena Radulović and Danijela Štajnfeld, that it is ready and willing to help and protect them, as well as start the proceedings at once. The responsible media outlets have also shown that protecting these women lies beyond any race to increase the circulation, but is that enough? Sadly, it hardly is, given that the very political circus is used to put pressure on the institutions and prevent them from doing their job.

Let the authorities resolve this case where it belongs – at the institutions of the state! And do not drag the victims of violence through your political mud and exploit them on the streets and at rallies!

Turning everything into a political campaign

Yesterday's events in Jagodina, where Marinika Tepić gave a deposition at the police headquarters, proved conclusively that her and her boss Dragan Đilas's true motive is not to fight for the truth and the victims of political violence, but to score cheap political points. Tepić did not reveal the names of the alleged victims to the police either.

Tepić's boss Đilas accompanied her to the police headquarters building, where their supporters were waving slogans. Nebojša Zelenović and Janko Veselinović were among those who took the opportunity to score a few political points. After she left the police headquarters, where she had been for about two hours, Tepić said that she had given a deposition regarding several criminal offences specified in her summons, including influence peddling, paedophilia, and prostitution.

"I have described to the police the direct knowledge of no fewer than seven persons, including both witnesses and victims. However, I couldn't reveal their identities without putting victim and witness protection in place. I cannot disclose their names," she said.

Either say who the paedophile is, or stay out!

Igor Jurić, the founder of the Tijana Jurić Foundation, has addressed the topic of procuring girls in Jagodina in a recent public appearance. On the occasion, he muddled things up again as he did not reveal the name of the paedophile politician, or specify that the case he had spoken about a year before was linked to the allegations against Dragan Marković Palma. A question arises again as to why Jurić keeps making public appearances without saying anything. Mr. Jurić, why are you still doing this? If you don't wish to help the victims and the investigation, if you don't answer any questions from the media in concrete terms, then what is your game plan? Stop confusing the public – either say who the paedophile politician is, or stay out. Let the institutions do their work! Because you're obviously not helping them either. You stated that you had revealed everything to the Prosecutor's Office and the police, but they have issued a denial.

Nebojša Stefanović, former Minister of Interior, addressed again yesterday Jurić's claims that he had revealed everything at the Ministry of Interior, saying that none of that was true.

"He didn't give me the name of the perpetrator or the name of the victim, or any evidence of this criminal offence. As Minister of Interior at the time, a member of the Cabinet, and a human being, I wouldn't have waited a single second – I would have waged a campaign with a sword of fire against such a person," Stefanović said for TV Pink.

Disgraceful conduct of the new-old duo

Palma and Mića Marković belittle women and treat them like objects

Even as he attempts to clear his name of this scandal, supported whole-heartedly by Megatrend's owner Mića Jovanović in the wake of his about-face, Dragan Marković Palma, who stands accused of pimping girls and women in Jagodina, keeps disrespecting women! One gets the impression that the two see nothing troublesome in the fact that girls and women are treated like décor at Palma's parties – attended on several occasions by Jovanović – and are used for the purposes of entertaining the guests. Jovanović himself has said that young and attractive girls and women are a trademark of Palma's parties: in his first statement on the subject, in which he accused Marković of procuring, he said that United Serbia's leader would point out to the girls which official they should sit next to. Jovanović changed his tune two days ago, retracting his allegations of procuring, but did not disavow his earlier statement regarding the presence of girls at the parties. 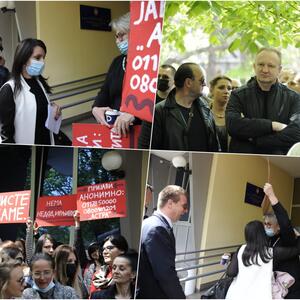 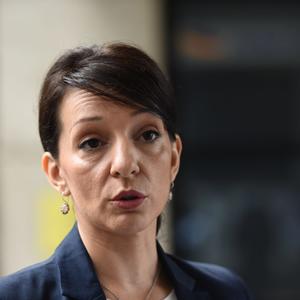 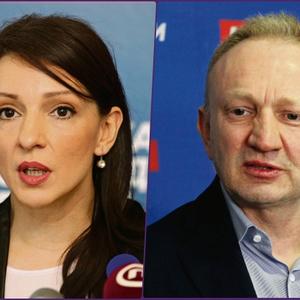 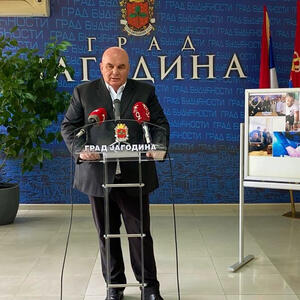