IN ĐAKOVICA, AN ALBANIAN DOG HAS MORE RIGHTS THAN A SERBIAN WOMAN: Dragica Gašić is banned from entering shops, STAYS IN!

She is not a guest at the place she is being driven away from. Or a leaf from a walnut tree blown off at dusk by a breeze from Mount Paštrik. Her roots run deep in Metohija's soil, in which everything thrives except Serbs

A word of warning: What you are reading is a first-hand account. The scenes presented here may make you feel sick or angry. A sadness may come over you as well. But that is real life. If you don't like it, turn on the TV.

Introduction: After 22 years spent in exile, Dragica Gašić returned to her apartment in Đakovica on 9 June this year. Ever since then, she's had curses and expletives shouted at her by her fellow townspeople in the street, she's been banned from entering bakeries and grocery shops, and hasn't been out of her apartment at all since Vidovdan (Saint Vitus Day). To find out more about this news, a Kurir photographer and myself – who is writing these lines – travelled to the scene of these events.

Đakovica is a town with a long tradition. It is believed to have been named after its founder, Vuk Branković's vassal and Serbian magnate Jakov, who coined his own money and signed it 'Iakov'. This is where 'Đakov' comes from and, consequently, 'Đakovica' and the Albanian form 'Gjakovë'… This I quote: "In the comprehensive Turkish census of 1485, Đakovica is listed as a village with 67 households and a village priest. All the personal names in the census are Serbian, except two, which might be of Albanian origin." This I add: "In the 18th century, the Seminary of the Serbian Orthodox Church was active there," and conclude by the fact that following the NATO campaign, all the Serbs fled the city. Four elderly ladies were the only ones to move out of their destroyed homes and into the yard of the Church of The Ascension of The Holy Virgin Mary in Đakovica. Protected by KFOR, they have been waiting there for God to answer their prayers and help Serbs and, if this is too much to ask, to do at least what they would add at the end, with silent lips and feeling a touch ashamed of their selfishness – ease their earthly strife and take them to his glory. One of them has since passed away.

A picture frame: Dragica Gašić was born in 1962 in the village of Veliko Kruševo near Klina, in the municipality bordering on Đakovica. Villages, municipalities, as well as the fact that her grandfather, Cvetko Gašić, was the head of the Klina Municipal Council before the last world war – all this is dull and superfluous information, but it is important for the story, because it demonstrates that Danica is not a guest at the place that she is being driven away from. Or a leaf from a walnut tree blown off at dusk by a breeze from Mount Paštrik. Her roots run deep in Metohija's soil, in which nowadays everything thrives except Serbs.

She spent most of her active life as a cleaning lady at the police headquarters. In 1997, she was on welfare as a single mother with two sons, aged 13 and 10, and received housing. Two years later, under a hail of NATO bombs from the sky and KLA bullets from the mountains, the three of them fled to Smederevska Palanka. She cleaned offices at the local police station as well, and when she retired, she contacted a Kosovo organization concerned with the protection of the property rights of refugees. The proceedings took nearly a year, and eventually, acting on the court ruling, the Kosovo authorities evicted an Albanian man living unlawfully in her apartment.

"He was evicted on 9 June this year, at 9am, and I moved in at 2pm. His home appliances were in the hallway, he was sitting there too, and I walked past… He didn't say a word, but the neighbour from across the hall was hollering, 'What are you doing here? This is Kosovo, and you're a Shkije!'…" The scene of the events, the face of the town: Two police officers in an SUV across the street from the building where Danica Gašić lives on the fourth floor. They were young, and sported crew cuts and modern sunshades, just like in US films. The one thing that fucked up their style were the blue pants made from cheap synthetic fibre, which made them look like track workers. They started rummaging through the box with food that we had brought, taking a close look at each bag of sugar, and lifting each bottle of cooking oil. Then we emptied our pockets, put our hands on the trunk of the car, and spread our legs (that's American movies for ya!), so that they could pat down our thighs and waists… If the point of this was to protect Danica, she was in safe hands! But why were they doing such a thorough search of the car that we had taken to get there?

The representatives of the Turkish KFOR were visiting Dragica at the time, so we spent the next hour and a half in the shade of a shrivelled bush, just looking around… I don't know what the street was called before, but now it proudly bears the name of an Albanian actor who met with considerable success in Germany at the turn of the 20th century - Aleksandër Moisiu. All the buildings on it were constructed during the golden age of the 1980s – with brick veneer and balconies overlooking the long since gone lawn. An empty patch of land cracked from the heat, and a sign detailing the littering fines: 5 euros for paper, 10 euros for glass, and up to 100 for plastic. On one of the balconies, a young man in dress shorts and a T-shirt was idling away his time lying the way you do it in the East – on his side, resting his head on his hand. Both him and the police officers were gawking at two girls in shorts, who giggled as they kept coming back into view, first from one side and then from the other. Then a girl on an electric scooter passed by, followed by a group of young men – hipsters with beards styled with wax – and elderly women at the wheels of cars crawling in search of a parking place… We could have been in Nikšić, or Zenica, or Karlovac, or any other town in the former Yugoslavia on that Thursday, and we would have seen the same thing. But, nowhere else except in Đakovica, Kosovo, would a woman be sitting behind a thick tarpaulin stretched across the windows because curses, hatred, or even a beating perhaps, were lurking in the street below.

And then a woman whose head was firmly wrapped in a scarf from the eyebrows to the chin passed by and sat behind the wheel of a red Opel Corsa, followed by a girl dressed in a similar fashion, who was going on foot... Then an elderly lady with short hair went by, wearing tight light-coloured pants and speaking angrily on her cell phone, followed by girls wearing even tighter pants, who disappeared behind an ad for a bank operating in Belgrade too: the same photograph on the billboard, the same polite invitation to do business together, but in Albanian.

In front of a supermarket, salesgirls in uniforms were stacking up cardboard boxes, just like in the Belgrade neighbourhood of Banovo Brdo, Trošarina in Niš, or Pivara in Kragujevac… And you think to yourself, "Who the hell was it that set us against each other…?" but it was at this supermarket that the staff had refused to sell food to Danica.

"I went in, and a saleswoman told me, 'Ma'am, the boss said that you cannot buy anything here and that you shouldn't come again!' " she told us when the six Turks left, and we climbed the narrow staircase and went into the apartment.

"It was the same at the bakery, when I said, 'Më jep një bukë!' I just needed a loaf of bread... What do you mean, what did I do? I turned around and left. No one said anything then, people were silent, but out in the street there were people who would approach me, call me a Shkije, and tell me that I should leave Đakovica and that there was no place for Serbs here…"

A friend from Klina brought her food. While he was with Danica in her apartment, someone deflated two tires and slashed the other two on his car with a Novi Pazar license plate, parked behind the police SUV. "How is that possible?" someone asked me. I shrugged.

On 30 June, Danica called a repairman to replace the unsafe front door with a high-security one, the kind that the other neighbours in the building had too. Municipal inspectors banned the works and removed the door.

In place of a living room table, Dragica had a cardboard box covered by a washcloth. The Government of Serbia's Office for Kosovo and Metohija was going to buy basic furniture for her soon. Hopefully they wouldn't forget to buy insulin too, as she had enough to last her for four weeks.

"What else do you need?"

"Freedom," she said straight off.

The word has become hackneyed. I've heard so many people say that they don't have enough freedom, but all of that was overdramatizing, all thin gruel… Dragica, however, was bringing back its true meaning.

Then I asked her the question that I had come there for:

"Why? Until when? What are you hoping for? What sort of life are you forced to live? Do you think that the hatred will go away?"

She must know better than me. At any rate, that apartment was all she had.

The representatives of the Turkish KFOR had spent a long time studying the apartment ownership documentation, she said. Probably because in early July the municipal authorities had initiated the procedure of annulling the decision granting the apartment to her. They eventually asked her if she would be happy with getting a same-size apartment in another city.

"I would only be happy with Mitrovica."

If this were to come to pass, Dragica would be able to get out of her predicament, and the Đakovica townspeople would get rid of this Serbian woman. The 450 Serbian families who had fled Đakovica and were now demanding to return there, which the international community supports in principle, would know where they stood.

The end, for now: I've been travelling around Kosovo for decades, and I know that not everywhere is like in Đakovica. And that not all Albanians are like the owners of the supermarket and bakery in Đakovica's Aleksandër Moisiu Street. I steer clear of big words, the kind of words that incite hatred. But I did see this with my own eyes, as I waited in the thin shade of a shrivelled bush in front of Dragica's building: a girl and a well-groomed dog came down the stairs. About an hour later, I was still there, and I watched as the girl and the dog returned. The comparison suggests itself: the dog can take a walk, and Dragica cannot.

I would like to ask the reader not to see this as instigating, because it is not. I'm not getting into the how and why of it all – I was there, and I'm now reporting on what I saw: In Đakovica, an Albanian dog has more rights than a Serbian woman.

A cold sweat was crawling down my back as I was leaving the town.

I knew that somewhere out there, in the yard of the Church of The Ascension of The Holy Virgin Mary, under the protection of KFOR, two nuns and one elderly woman were spending their earthly days in prayer.

If that is how God protects Serbs… 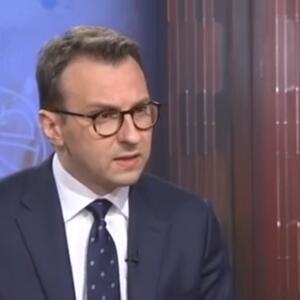