NEBOJŠA LAĐEVIĆ, DIRECTOR OF THE CSS ANAESTHESIOLOGY CENTRE, SPEAKS WITH KURIR: 'The coronavirus will go on for two years.'

'I'm worried about the steep rise in infections, especially the fact that the 500 new cases will infect an additional 500. We aim to slow down the spread of the virus as the health system could not handle 4,000 to 5,000 inpatients at any one time.'

'The coronavirus will go on for two years, possibly even longer. There will certainly be some residual incidence of the virus. Everyone asks me how I handle it all so well, but I said to myself in the beginning that this would go on for two years, so I'm undisturbed. I'm still at the start line. We have two chances to get back to normal life – either the whole world gets vaccinated, or the disease vanishes all by itself. Since we still don't have a vaccine, face masks are now the vaccine that we do have,' Professor Nebojša Lađević, Director of the Centre of Anaesthesiology and Reanimatology of the Clinical Centre of Serbia, said in an interview with Kurir.

I'm worried about the steep rise in infections, especially the fact that the 500 new cases will infect an additional 500. The number of hospital admissions has gone up too, with the Bežanijska Kosa Medical Centre already having 20 to 25 admissions per day. Our anaesthesiology teams are ready to provide assistance to them as early as the coming weekend.

Are we in for an apocalypse?

Well, perhaps not an apocalypse, but we are certainly ready for the third wave and an increase in patient numbers.

What is the clinical presentation in the third wave?

The presentation is the same as in the first and second waves – it starts with a severe pneumonia, and progresses from there. It's just a dance of numbers. When you have many infections, there are more intensive care patients and more of those on intubation. The fewer of the former, the fewer of the latter. We aim to slow it down as much as possible. We cannot fully stop the spread of the virus, but we shouldn't remove our face masks and throw parties, resulting in 4,000 to 5,000 inpatients. The health system couldn't handle that many all at once.

We have already had many young people with severe symptoms, as well as those who appeared healthy and yet died.

Absolutely. Because the coronavirus causes many more complications in the other organ systems than any previous virus. The most frequent complications include lung and coagulation problems, thromboses, and pulmonary embolisms.

Can stroke occur as well?

Stroke can be one of the consequences, but it is also caused by an embolism. Nearly all patients have coagulation problems in the lungs. It's not the case that Covid-19 causes a deep vein thrombosis in the leg, causing an embolus to start moving, and resulting in a lung embolism. It causes coagulation in the capillaries and blood vessels of the lungs. We have had patients whose general condition was improving, and then there was a sudden deterioration, because of the thrombosis. Clinical experience has shown that those who have not received an anticoagulant therapy, or haven't had it in time – for example, those who stayed at home for 10 days or so, running a fever – have had much worse outcomes than those who did receive it from the start.

So, what sort of havoc does the coronavirus wreak in the body?

The point is that once the virus causes a ventilation problem, and there isn't enough oxygen, the entire body suffers and then there is a chain reaction. The coronavirus does not hit the liver and destroy it, or go at the kidney in a way that makes dialysis necessary; rather, it causes problems in the lungs, resulting in a haemodynamics-related issue, leading in turn to a kidney failure due to low blood pressure, and so the process goes.

You have had instances of spending a year's worth of oxygen in 15 days.

A great many patients needed different types of ventilation support, from ordinary face masks, providing a three-, five-, or 10-litre flow of oxygen per minute, all the way to ventilators, providing a very high flow delivery – 70 litres per minute. We have spent tonnes of oxygen because we tried to avoid putting patients on intubation, which is the last resort.

How many intubations have you had, and how many successful removals from mechanical ventilation?

We use mortality rates for that, so we're around the global average, possibly a bit better. Using mechanical ventilation for the most severe patients has resulted in the recovery of about 40 to 50 percent of them, which means that the mortality rate is under 60 percent. The global outcome is 80-90 percent mortality.

Is it true that it takes the coronavirus ten minutes to put a person able to communicate in a ventilator bed?

If someone is admitted in a poor general condition, whether they have tried to self-medicate at home, or they have been admitted and then gone back home, we could be talking to them at one moment, and then, ten minutes later, they could be on intubation. But, if they come in time, receive treatment, and yet the symptoms still worsen, intubation will take place at a certain point. So, you cannot go from a clean bill of health to a ventilator bed in ten minutes.

What are the most lasting effects of Covid-19?

Fibroses – the parts of the lungs which aren't lung tissue anymore, making gas exchange impossible. They result in a reduced lung capacity, which in turn leads to chronic fatigue and weakness, or the complete restriction of the lung parenchyma, which then requires rehabilitation.

We have removed chloroquine from the treatment protocol, and introduced remdesivir. But the WHO says that neither is effective.

We have a new disease - as it developed, the protocols developed in step. When chloroquine was recommended, we used it. Over time, as studies were being conducted showing that this one thing was more or less useful than another, the protocols were adapted. When antiviral medications were identified, we started incorporating them as well, so now we have remdesivir, obtained by the National Health Insurance Fund and expensive. But, it is used in the initial stage of the disease, while the virus is replicating. Once it replicates and is causing problems in the body, you no longer need it. The patients who have developed a cytokine storm, i.e. the body's excessive immune response, receive corticosteroids - dexasone, dexamethasone. Of course, we don't administer them at the start of the infection because we want the body to fight it out. Therapy is individualized, adapted to the stage of the disease, and cannot be applied schematically.

A clash with Covid-19

What do we do when the coronavirus and the flu clash?

I have taken a flu shot, to avoid the two viruses combining. Also, in order not to mask the symptoms, saying it's the coronavirus when it is actually the seasonal flu. All medical workers should take the shot to protect themselves against the flu. This would give us a sufficient number of doctors, nurses, cleaners, drivers, and oxygen tank delivery personnel for the fight against the coronavirus. So, we must all be able to function, as must the society, because one needs to make a living too. 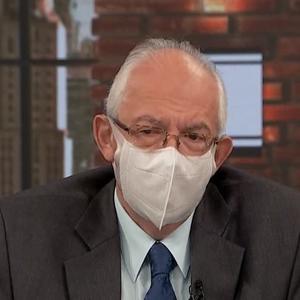 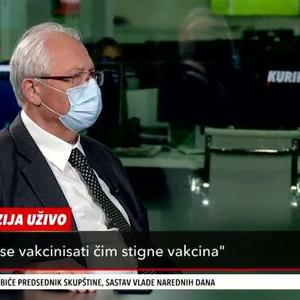 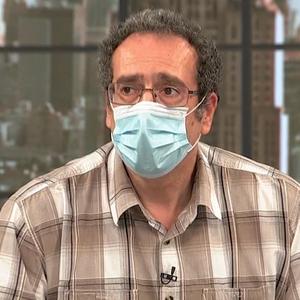 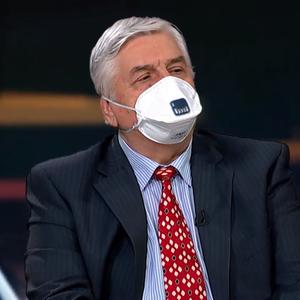