IN NOVI PAZAR HOSPITAL RED ZONE: When antivaxxers end up on oxygen, they all promise to promote vaccination

Kurir visits the General Hospital Red Zone in Novi Pazar, a town where in a 120,000-strong population, only 8,700 people have been vaccinated. Of the 150 non-vaccinated patients, every single one is on oxygen and denies the coronavirus, saying that it's the flu or the common cold.

There were more than 150 of them, and not a single person could breathe without oxygen. They were waging battles for their lives and almost none had been vaccinated. The Red Zone of the Novi Pazar General Hospital is full of people who don't believe in the vaccine. Much like the town itself – only 8,700 have received the jab out of 120,000. And it doesn't help that the coronavirus rampaged through Novi Pazar last summer. They run from the vaccine like it was the devil himself.

There were quite a few cars in the "red" hospital parking lot yesterday, and the two Covid clinics were at full tilt. An ambulance from Raška had arrived, and an old man was carried in on stretchers and admitted without waiting.

"I've brought in my mother. No one's getting jabs, so why should we? No idea if there's pig gelatine in it or not, but we're just doin' what everyone else is doin'," said a Novi Pazar local in front of the clinic as another was trying to get the attention of Dr Meho Mahmutović, the hospital's chief physician and our host. 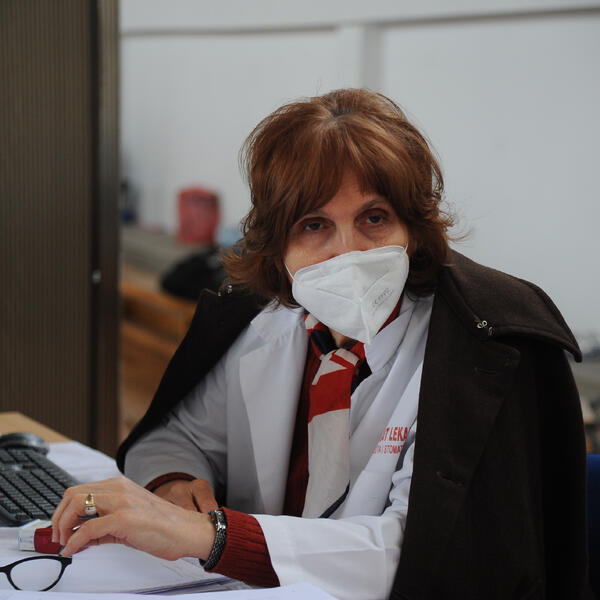 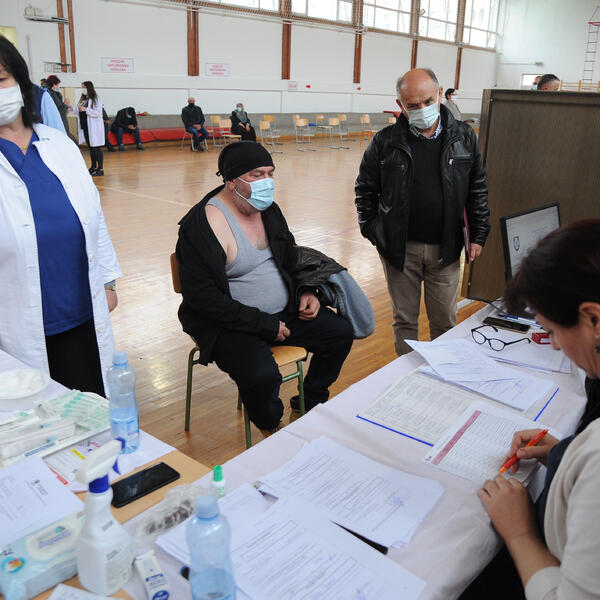 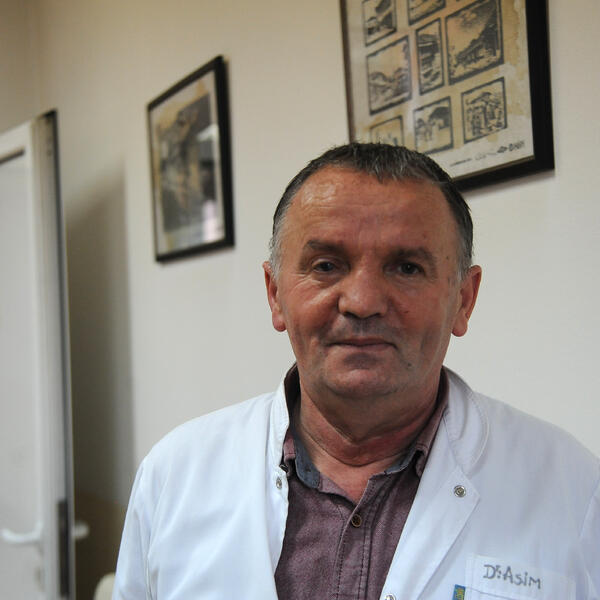 "My wife's had a cold for 15 days, and now she's contracted pneumonia. I just want to have her admitted, I don't want her to die," he hollered.

Many here had a "cold" or the "flu". They barely mentioned corona, and none wanted to have their pictures taken. Then we entered the hospital red zone – protective suits, full gear, and rubber boots! Better to be safe than sorry!

"Heavy-duty boots for heavy-duty kind of work," remarked Dr Asim Leković, a pneumo-physiologist who had been here since day one.

Patients had been writing down messages about their troubles on the wall next to the front door: "Corona goes on :(", "Back to square one", "Thank you, baby" …

In the rooms – struggling for breath behind the face masks. He was 56.

"Well, I had a cold. So, had that, and then the fever, which ain't dropping, so here I am. And I don't know if it's corona. I haven't taken the jab. Whaddya gonna do. It was just a cold," he uttered slowly, not looking very well.

The bed opposite – a slightly better situation. A 74-year-old gramps.

"You gotta take that jab, ya hear?" Dr Mahmutović insisted.

The next room – the flu!

"I've been down with a bad case of the flu for some ten days. It got a bit better and I thought it was gonna pass. But, here it goes again," said a man in his fifties.

When we asked him why he hadn't taken the vaccine, he went back and forth saying he would and then doing a 180. Pretty much the same as a 66-year-old man in the oxygen unit. He had pulled through, and was being prepared to return to the general ward. Whether the other seven patients would be as lucky was hard to tell. All of them had been placed on non-invasive mechanical ventilation, and the staff had managed to treat them without intubating them. Dr Mahmutović knew every patient in the red zone. Everyone's name, where they were from, and the course of their illness. An elderly woman was having trouble breathing but kept asking to be transferred to the general ward. There was still briskness in her voice, as her saturation dropped to 55. And a sad state of affairs all around – masks covering whole faces, arms swollen and blue with needle marks, the machines humming …

"At the moment, we have 152 Covid patients. This is an encouraging number, as only seven days ago we had 198. What concerns us is that all of them have medium to severe clinical presentations, and that deterioration is fast, with everyone receiving oxygen therapy. Patients come from all over, and there's a good few tourists from Mount Kopaonik. The worst thing about it is that people don't want to get vaccinated. A tad over 8,700 have received the jab, which is appalling. And we don't just get the stories of vaccines containing pig gelatine, which is prohibited for Muslims. It's mostly the nonsense about microchipping, the 5G network, aerial poisoning – the kind of thing you get all across Serbia," Dr Mahmutović said, adding: "When they come here and see for themselves how difficult it all is, that you can actually die, they change their tune – saying that they will promote vaccination. If people wish themselves and their families well, they need to be deeply committed to the vaccination. What I most resent is that we have to persuade people to get a jab in a situation where we have four kinds of vaccines and more than enough doses. I get calls every day from 50 to 100 people from Bosnia, Montenegro, Macedonia, asking to get vaccinated here. And all that while we must persuade people here that this is not a conspiracy theory. Everyone must help the effort to come out the other side of this. You can't have some pulling uphill while others push downhill."

Dr Leković is considered a good and honest Muslim here, and his commitment to his faith is evident in the fact that he goes on vacation for the Ramadan fast.

"The vaccines contain no anti-corona component that isn't in line with our faith. There is no pig gelatine, or anything suspect which would run counter to the rules of Islam. I'm pleading with everyone to get the vaccine and understand that corona can also kill," Dr Leković said.

We were saying good-bye to the hospital, the doctors, and the nurses … It had been pouring rain the whole day, and people were hurriedly passing by in this compact town. The Oriental-looking streets, full of mosques, coffee shops, stores, good Pazar manti pastry and minced meat rolls, were crowded. The measures were in place, and everyone was taking their favourite delicacies at the door.

"I got the jab straightaway. What's there to think about? And nothin's wrong with me. My old man went to get the jab, rolled up his sleeve, and split. None of my employees has had the vaccine. I can't badger them to do it, but this whole thing is just plain nuts. You give everything free to people, and still it ain't good," a Pazar local declared.

Cars backed up on Prvomajska Street were honking as the coffee shop owner said: "It's a wedding. Some folks are making merry while others are dying up there at the hospital. People here are more interested in making sure their coffee house isn't closed than attending funerals …"

Discipline among the Turks

A vaccination centre has been set up in the sports hall of the Secondary School for Medical Professions for all those wishing to get the jab but haven't registered. But no joy there. Dr Vesna Đoković told us that since 13 March, when the centre opened, only 1,500 people had been vaccinated. There was about ten or so people in the hall, mostly workers from Turkey, hired to help with road construction. Manager Šukri Hajdarpešić, who had brought them here, told us that they knew it was a good idea to get the jab because there were 100-150 of them in shared accommodation. Aydın Koroğlu, a concrete pump operator from Istanbul, was also there: "I'm glad that I've received the shot. It's the best option for my health, and I have no issues with my faith."

'The vaccine does not lead to sin'

Marjan Ivanuša, the WHO representative in Serbia, travelled to Novi Pazar a couple of days ago, where he spoke to the people in order to try and convince them that the coronavirus vaccines do not contain pig gelatine and that no Muslim would betray their faith by getting the jab. The Sandžak Mufti, Senad Halitović, also said in a telephone conversation with Kurir that the vaccines are safe.

"On the religious side of things, there is absolutely no issue with getting the vaccine," Mufti Halitović urged.

Mufti Melvud Dudić, Head of the Meshihat of the Islamic Community of Serbia, had the same message:

"Muslim should rest assured that the vaccines contain no component parts which are forbidden by the rules of Islam, which is precisely what we have heard from the WHO representative right here in Novi Pazar. They have convinced us that the vaccines being administered aren't sinful. We must do everything we can to save every human life," Mufti Dudić told us, noting that another issue was that "people are deeply distrustful of the Novi Pazar healthcare system management, which failed most noticeably in June and July last year."

Appalling – Influenced by antivaxxers instead of being among the first A nurse was sitting on a bench in front of the clinic. She had tested positive. "My husband got the jab, my parents too. But no one wants to get it at work. There's all kinds of stuff on the internet, everyone just keeps talking about it. Like, this thing is bad and that thing is bad, so I waited. Not a clue what I was waiting for. And now I feel ashamed, but there's nothing I can do. I just want to be well," she said.

Therapy – We have everything that Belgrade has Dr Mahmutović pointed out that Novi Pazar has everything that Belgrade has: "Not only is it the case that people don’t want to get the vaccine, but they also come in late when they get sick. As a result, antiviral therapy cannot be administered, and the clinical presentation deteriorates immediately, even though we have all the medications that Belgrade hospitals have – Favipiravir, Remdesivir, Bamlanivimab, Actemra, and anti-SARS-CoV-2 convalescent plasma." 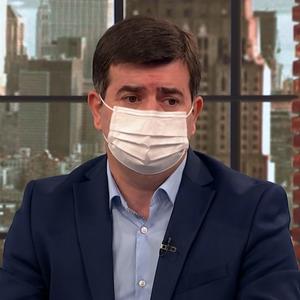 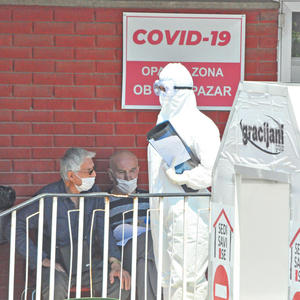 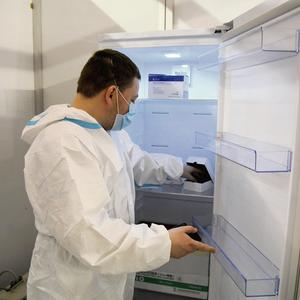 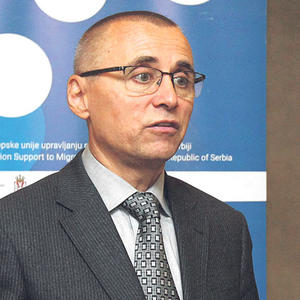